Council uses CGI to present HMS Beagle in all her glory! 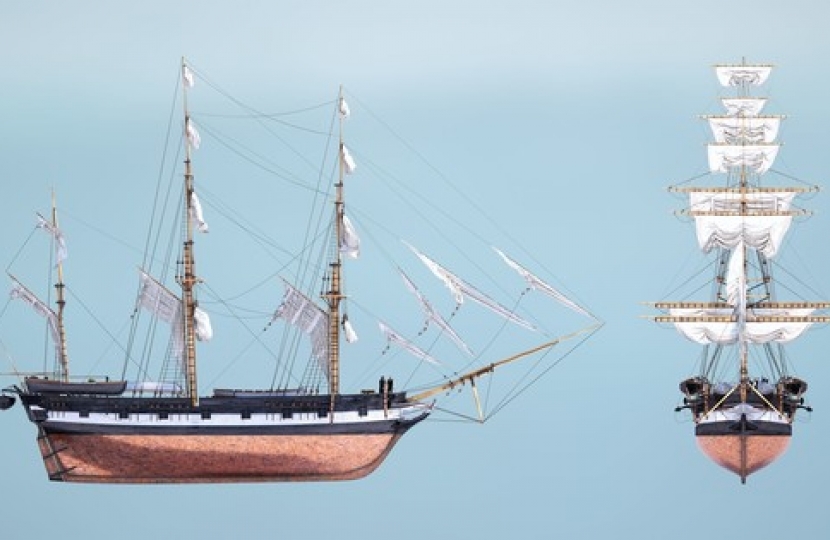 Rochford District Council is offering residents and visitors to the district a unique opportunity to see the world-famous HMS Beagle using computer-generated imagery (CGI) at www.discover2020.co.uk

One of the most famous ships in history, HMS Beagle circumnavigated the globe in the 19th century and through her voyages, with her famous passenger Charles Darwin; and her most famous captain Robert Fitzroy, her name is synonymous with discovery in the fields of science, meteorology and even space exploration.

HMS Beagle was finally decommissioned by the Royal Navy in 1845 when she was transferred to the Coastguard and repurposed as a customs watch vessel stationed at Paglesham in Rochford District, where it is  believed she was broken up after spending 25 years in the River Roach combatting smuggling.

The project, made possible by support from The National Lottery Heritage Fund, is a high-end CGI experience to show how HMS Beagle would have looked both in her prime and also when she was in the River Roach at Paglesham.

The images are going to be very high resolution created from detailed drawings of the ship and its construction and will provide layers to show maps and elements that the research was taken from.

Made possible by money raised by National Lottery players, the project will enable viewers to see on their computer, smartphone or tablet, exactly how the ship would have looked.

There will be a series of very high-resolution panoramas that will be viewable across all devices and is responsive to movement so that when you move your phone or tablet the view will change giving you the opportunity to have a stunning visual experience. Taken as if from the deck of the ship itself, viewers will be able to understand how HMS Beagle would have looked and how it might have felt to spend time on her.

The Leader of Rochford District Council, Cllr Simon Wootton said: “The model is really a first stage approach to try and bring some context to HMS Beagle and begin to create a working archive that can be built upon going forward in multiple ways.

“Traditional flat plans can only give an indication of what the finished vessel would have looked like, but the CGI will really bring her to life.”

Creator of the project, Grant Cox MSc, from ARTASMEDIA said: “The model has been built inside of 3DS Max which is commercial grade software and is very refined, everything holds up to the point that you can zoom in and see very clear details at the very high resolution that is required for the panoramic experience.

“There will be various scenes to show both the technical overview of the ship itself created from detailed plans and snapshots of how it may have looked at various points in its life from sailing rigged and later in its life in Paglesham Pool which relates to its cultural setting in Rochford.”

With a digital Halloween approaching due to Covid-19 restrictions, safeguarding partners across the county are joining forces once again to raise awareness about the dangers of online child exploitation.